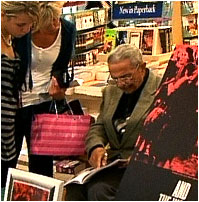 “The genius of Peter’s poem, is that it takes a photograph meant as a birthday gift for Hitler and transforms it into an instrument for teaching peace and tolerance.”
– Mark Uszler, Los Angeles-based Writer

“I am so honored that seeing Schindler’s List moved you to publish this powerful and soulful poem. Thank you for your kind thoughts and your signed poster. I’m having it immediately framed, to hang in our foundation offices. But, most of all, thank you for giving us your greatest gift: your videotaped testimony for the archives at the USC Shoah Foundation Institute.”
– Steven Spielberg, Fim Director, Screenwriter and Producer

“The memorialization of the Holocaust is important, not only to the victims of the world’s greatest crime, but also as a warning to the dangers of bigotry, which are yet to be overcome. Peter Fischl’s work is a welcome contribution in the battle for memory in a more humane society.”
-Aaron Breitbart, Senior Research Associate, Simon Wiesenthal Center

“I’ve taught your poem in 4 classes and have presented it to a Holocaust workshop of teachers. Everyone responded very positively. I also developed a successful Writing Lesson, based on your poem and have used it extensively.”
– Nancy Gorrell, English Teacher and 1992 New Jersey State Teacher of the Year

“My wife and I read your beautiful poem, its words describing that captivating picture are at once haunting and stunning. As someone who lived through the stark horrors of Nazi occupation, your poem left a profound impact.”
– Tom Lantos, who, at 80, died in 2008, was the only Holocaust Survivor to serve in the United States Congress. Two years older than Peter Fischl, Lantos was born & raised in Budapest, Hungary, where he was part of the Nazi Resistance Movement.